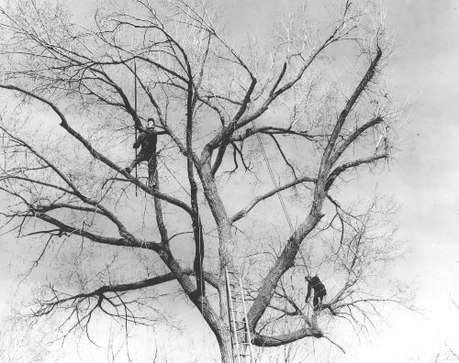 Written by Hugh E. Thompson
January 9, 1997
​
The first Kansas State Shade Tree Conference was held in Room 244 Waters Hall at Kansas State College on the third Thursday and Friday of January 1954.  The Second and Third Kansas State Shade Tree Conferences were held in Williams Auditorium in Umberger Hall at Kansas State College.  Following the banquet at the first three Kansas Shade Tree Conferences, it was customary for anyone attending who wished to would show slides and discuss some particular project or job that he had done.  In the program for the 4th Annual Kansas State Shade Tree Conference there was a short notice stating that "following the banquet there will be a discussion about forming a state association."  The Fourth Kansas State Shade Tree Conference was held in Williams Auditorium on January 17 & 18, 1957.  However, the banquets were held in the Wareham Hotel in downtown Manhattan.
​
Following the banquet on January 17, 40 years ago next Thursday, Fred Wagner, the Wagner Tree Service in McPherson, Kansas who had proposed the formation of a state association, led the discussion.  I don't remember how many attended the banquet, but 33 of those attending stayed on for the discussion.  There were 7 commercial arborists, 2 nurserymen, 3 Park and Cemetery Superintendents, 2 institutional grounds superintendents, 7 from the Landscape Division of the Kansas Highway Commission, 2 from the Entomological Commission of the State Board of Agriculture and 5 professors from Kansas State College.  That totals 31; and, for the life of me, I can't recall the positions or professions held by the other two.  These 33 men signed their names on the back of a Shade Tree Conference Program.  This is a copy of those signatures and the inscription I put on it later.  The original was framed.  I have been unable to find it.  This may be fortunate because, the last time I saw it, the names were just about faded out.  After a general discussion lasting over an hour, the general consensus was that we should go ahead with the project.
​
A committee consisting of Roy Rasmussen, Grounds Superintendent at Boystown, NE; L.W. Jones, Cemetery Superintendent in Manhattan; L.C. Gatewood, nurseryman from Leavenworth; Fred Wagner, commercial arborist from McPherson; Charles Broadwell, Kansas Highway Commission from Chanute; L.A. Calkins, Assistant State Entomologist from Iola; Ray Keen and Hugh Thompson from Kansas State College began working on a Constitution and set of By-Laws to present for approval or rejection before the Friday morning general session.  Several of these were selected because they were members of similar organizations such as the National Shade Tree Conference and its Midwestern Chapter, New York State Arborists Association and the Central Plains Turfgrass Foundation.  Using as guides the Constitution and By-Laws of these organizations, a Constitution and By-Laws was prepared.

The following day, it was my responsibility to make the presentation before the general session of the Shade Tree Conference and answer any questions that might arise.  In a reasonable length of time, the Constitution and By-Laws were adopted.  The Constitution designated there would be 9 members on the Board of Directors, and the By-Laws directed that in this first election 3 would be elected for 3 years, 3 for 2 years, and 3 for one year to insure there would be a rotation of members on the Board.  Thereafter, 3 directors will be elected for 3-year terms.  Unfortunately, I have not yet had time to go back into the records to find out who were elected to the Board.  The Constitution further directed that the members of the Board of Directors would elect from that body a President, a Vice President and appoint a Secretary-Treasurer.  At a luncheon, the members of the Board of Directors elected Fred Wagner to be President and Roy Rasmussen as Vice President.

This created the first Constitutional crisis.  First, could a person from out of Kansas become a member of the Kansas Arborists Association; and, if he could, could he hold an office.  A study of the Constitution determined there was nothing in it that would prevent either.  It was a feeling of the members of the Board that if we become exclusive, we would block the membership of many arborists from Missouri and Nebraska that had contributed much to the profession in Kansas.  I was appointed Secretary-Treasurer, a position I held for 18 years.

In closing, I am sure I speak for the rest of those that met that night to prepare a Constitution and By-Laws that would give a prospective Kansas Arborists a solid foundation on which to grow and promote better tree care in Kansas and surrounding states.  Looking at this gathering tonight, I feel that, though the Constitution and By-Laws have been added to create programs like Certification of Arborists and the Arborists Schools, by and large we were successful in what we were assigned to do.